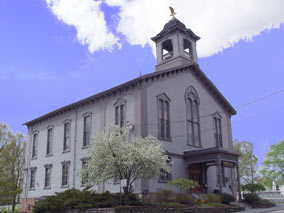 By the 1870's the citizenry had prospered and grown to about 2000. Yet still town meetings were held variously in the First Parish building, the Second Parish vestry and, according to one source, in an unfinished room over a store located on the present town hall site. Town records were scattered about in the homes of the various elected officials.

A Town Meeting held March 5, 1872 appointed Putman Shattuck, Esq., Capt. Charles Tarbell and Otis J. Tarbell as a committee to:
"consult on the propriety of building a Town Hall, + to report at a future meeting."

One year later, at the March 3, 1873 town meeting, Chairman Putnam Shattuck, who owned a business in North Village, delivered a report strongly advocating building the Town House, in a somewhat flowery style of Victorian era oratory. The Committee believed the "Townsmen" had a "growing conviction that there ought and must be" a House built for the towns' business. Expressed was the community's desire for a hall, not just for town business meetings, but also for an entertainment venue. In the language of the report the building would provide:

for the holding of such meetings as our citizens are want to hold for moral and intellectual improvement, also for amusement and pleasure.

The report was accepted as submitted (76 yeas, 38 nays) but the same verbal battle fought 130 years ago over the location of the first meetinghouse was being re-opened. Once again the citizens were split geographically, if only by a mile or so. Some citizens felt the proper center of town was at the five street intersections surrounding the Common; others firmly believed the center should be in the easterly part of town with the commercial and industrial development. An attempt was made by Jonathan Lawrence to choose a site during this town meeting; a potentially fiery discussion proponents didn't want to kindle at this meeting. Several citizens made speeches advocating that a building committee be appointed and allowed to "act freely and untrammeled" The audience was urged o take action for the public good rather than personal gain. The Committee was to address the plan of the building, cost and location. Members chosen consisted of the study committee members, Putnam Shattuck, Charles Tarbell, and Otis Tarbell plus two others specifically representing the interests of east Pepperell. These two gentlemen were Albert Leighton and Henry Blake.

At the resumed meeting on April 7, 1873 the Committee on the Town House made a report recommending building a "House" with the this description:

The estimates cost given was:

Location
As to a site on which to locate the house, 9 places have been suggested-

The Committee recommended the first lot on the list, the present site.
Col Shattuck moved that the Town accept and adopt the Report. The question immediately arose as to whether accepting the Report also determined the location. At this time the Moderator " tho't the town should vote direct on the question of site, & stated his preference for No. 4 lot ". This was adjacent to then School House District No. 7; present site of Peter Fitzpatrick School.

Much debate followed, so much that a motion was made to limit each speaker to 10 minutes "until all had an opportunity to address the meeting". This was a well-attended town meeting with over 270 voters out of a population 2000. To put this in perspective: the population in 2005 is about 12,000 and town meeting attendance often less than 270 voters.

Finally a motion was put forward that lot No. 1 be the site of the Town House. The results were 161 votes affirmative and 115 negative. The motion carried with marginal consensus.

Minutes of the meeting indicate the choice of building site was not well received or accepted by the meeting. One voter, Charles Parker made a motion that the vote to build be re-considered, that they not build at all. After much confusion over the motion and the votes taken, the motion did not carry by a 10% margin.

Next a Building Committee was appointed. Chosen were Sumner Carter, Col. Samuel P. Shattuck and William A. Ames. This Committee was authorized to sell the existing structures on the parcel and not to spend more than $18,000.

At the Town Meeting held Feb. 14, 1874 a committee appointed to audit the construction costs, made their report. Members were Charles Tarbell, Otis J. Tarbell and Amos J. Saunders. This audit report detailed every invoice, item by item. The bottom line for costs including land purchase was $27,100.45. This was met by some negative commentaries and questions but in the end the report was accepted into the record and the Building Committee praised for its work.

The first meeting was held in the new Town Hall on March 2, 1874, just one year after the vote to build.

Town Meeting discussion continued on the subject of renting the basement for use as a store and letting out the halls for other events. One citizen, Charles Winn, made a motion that "all parties in town, wanting the halls for moral purposes, be allowed to have the use of the same, for the amount of running expenses" which failed to pass as did a just prior article to allow renting of the halls at the Selectmen's discretion. Next Calvin Lawrence offered a motion "that all parties in Town be allowed use of the halls on equal terms." The minutes recorded by the Town Clerk note that this motion carried unanimously "after a prolonged discussion and a free expression of views." It would seem that there was much discussion over what was a moral purpose.

It appears the townsfolk used the new stage so much that in 1875 the Town voted another $1,000 to build the rear stairs to the stage. This two-story addition is clearly seen today on the south side of the structure. The sole reason for this addition was to "give a better accommodation for stage purposes."

Architectural drawings or even sketches of the building have not been found. But the structure as built does conform closely to the description given by the Committee at the April 1873 meeting. The report called for an 80 X 50 foot building, The present structure is 80 X 58 feet. There are two anterooms in front of the halls on each floor, measuring 22 feet X 15 feet

During WWII the eagle was removed from the cupola to avoid becoming a target for enemy aircraft. The cupola itself was retrofitted with windows to provide a search tower for that potential enemy. Regretfully the gold leafed eagle soared away, never to be seen again. Many years later, 1989, the Prudence Wright Chapter of the DAR, had the eagle reproduced and set atop the cupola.

The number of theatrical productions held is unknown but not forgotten by many still living. From 1874 through the 1960s, the hall hosted a variety of performances that deserve a history of their own. Over the years the building has been put to uses ranging from Police Station in the basement to basketball court in the upper hall. Town Meetings were held in this building until the early 1980's. Today it still houses the town offices, records and hosts numerous meetings.

Committee's Report on Town House was given by the Chairman Putnam Shattuck, Esqr. as follows:

Report of Committee on Town House

That a Town with nearly two thousand inhabitants, four hundred and twenty five legal voters, and a valuation of one and one half millions of dollars, ought to possess of House of suitable capacity and convenience in which to transact its public business, and contain a safe Deposit for its Books, Records, Library, and other valuables is, if we mistake not, but the common judgment of the community.

This infer from the fact that other Towns even smaller than ours, are moving in this direction. Nor are we aware of single instance in which a Town having built such a House, regrets the Investment.

We believe there is growing conviction on the part of our Townsmen generally, that at no very distant day, there ought to, and must be, such a House in Pepperell. It is a question worthy of your most candid consideration, whether the Town has done all its duty, though it may be able to hold its meetings with the present accommodations.

Whether, as Guardians of the Public Health, they should not see to it that a suitable place be provided for the holding of such meetings as our citizens are want to hold for moral and intellectual improvement, also for amusement and pleasure that all such meetings may be holden with the least exposure of health possible.

If the citizens are thought to be in danger from the prevalence of a pestilential disease, we at once call upon the Town to take suitable measures to protect the public health at whatever cost, and no one doubts the propriety of so doing- and has the Town nothing to do with the question whether its citizens, for want of good accommodations, shall be obliged to congregate in small inconvenient, and illy ventilated rooms, much to the exposure of health? We think the Town has a responsibility in the direction.

There is another thought which may connect itself with this subject, viz-

We trust that there is too much Patriotism in the hearts of our fellow citizens, to allow the present generation to pass away without erecting some suitable Memorial to our fallen Heroes in the late Rebellion. Could not such a Memorial be conveniently and economically connected with such a House as we have referred to-

In view of the foregoing considerations, and others which might be alluded to, your Committee recommends that the Town erect a House that shall be suitable for purposes desired, and be an ornament to the Town, and an expression of the good taste of its citizens-

That this subject be submitted to a competent Committee with instructions to select a site and present a Plan for the acceptance of the Town, the general question of location having been first determined by the Town-

All of which is respectfully submitted-