In September of 1833 a Mr. Eldridge opened a private school in Pepperell. In February of 1834 an association was formed for the establishment of the academy. It was built in three months at a cost of $900. The school continued until interest began to lag from 1854-1860.

In 1864 the building was taken over by the town when Pepperell voted to establish a public school for the higher grades. In 1880 the town had grown to 500 families and was legally compelled to establish a high school, and the Academy Building was used for that purpose. The last high school class graduated in the late 1880's. On January 23, 1875, sixteen people met at the home of Parker Kemp for the purpose of organizing a Grange. The names of 30 others were brought in and Reuben Lewis of Groton and Alpheus Swallow of Dunstable organized the Order of Patrons of Husbandry known now as Prescott Grange #73. 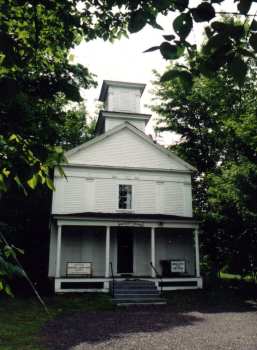 At the second meeting a committee was formed to find a suitable meeting place. Later a report was brought in that the lower room of the Academy Building was available. They first met there in February of 1875, and their meetings were held every Thursday night at 7:30 P.M.

In April of 1877 the meeting place had to be changed because of the town needing it for the high school. The Grange then met in the brick school house now used by the D.A.R. At times they went to the Town Hall for installations or other large gatherings. In November 1877 they moved to Central Hall, which was in the former Unitarian Church. When the high school was built the Academy Building was put up for sale, and in 1890 the Grange voted to buy it. In order to raise the money seven members formed a corporation called the Pepperell Grange Hall Company, and their charter was recorded on March 18, 1891.

After examining the hall from foundation to cupola they decided it was just what they wanted, if it could be bought cheap enough so they could afford to remodel and repair the inside. Soon after the property was advertised to be sold at public auction on March 2, 1889. A committee from the Grange was on hand and Bro. Parker Kemp made a bid of $705 and got it. It was not until July of 1890 that he was able to get a deed because of difficulties in settling the affairs of the Academy. On December 16, 1891, the above property was purchased from Mr. Kemp by the Grange Hall Co.

In 1922 the Grange Treasurer at that time bought up the stock from the Grange Hall Co., sold a Liberty Bond and borrowed the balance from a faithful Patron. The deed was transferred to Prescott Grange on March 22, 1922 for $1200. In 1928 the hard working members were able to pay off the mortgage.

Kerosene lamps were used until 1908 when electric lights were installed. After town water was put in town, the Sisters had a great desire to have it put in this building. The Brothers thought it could not be done because of the ledgy conditions. In 1921 a committee of three Sisters was appointed to investigate, and in May 1922 it was installed. In 1971 the bathrooms were put in, and now we are faced with how we are going to pay the betterment tax as well as the user fees. Through the years many members have contributed time, money, have had cleaning bees, painting bees, doing whatever was necessary to keep the hall in good condition.

In the 20's the Grange ran military whist parties, in the 30's the St. Patrick's Dances in the Town Hall, and through the years ran public suppers, foodless food sales, and yard sales. In 1942 the Grange fairs were revived and started in this hall. They soon had to be transferred to the Town Hall area and continued for 26 years, when they grew too big for the few willing workers to continue.

In 1887 three Brothers made a special collection of the different kinds of wood grown in Pepperell. It was exhibited at a Grange Fair in Worcester and won a prize. It is still on display in the lower hall.

In the early years degrees were worked for several times a year, first on the men and later on the women. The largest class of candidates was in April 1945--36 new members joined at a meeting held in the town hall. We still try to work the degrees at least once a year. In 1901 a ladies degree team was organized and continued for many years. In 1917 the first lady Master was elected and in 1923 a men's degree team was started and that too continued for several years. Both groups did drill work also.

Community service work has continued through the years. Soon after the Grange started they planted trees on the high school lawn, and one or two of them are still standing. They took down old fences along Main Street. Before town water was put in, the Grange bought a large watering trough that was placed at the junction of Main and River Roads. A member who lived near there carried water from his well to keep it full for the horses. One year school children were furnished with the Scothlite tape, and the police assisted in putting it on the bikes. Years ago the Memorial Day parade used to enter the cemetery across from the hall, and while the service was going on the Scouts were giving cold drinks and home made cookies in the Grange Hall yard. As the parade grew in numbers it now stops at the Town Hall and the V.F.W orders the food and set up the tables, and the Grange has served it for over 60 years. The children marching, Scouts, bands, and all the young sports groups have now grown to over 500 youth in the parade.

Monthly birthday parties were given by the Grange to patients in the former Freeman Nursing Home. Donations have been given to several flood and fire disasters. Money was earned and given to State Grange Health projects such as March of Dimes, arthritis etc.; also Heifer. A couple of years ago we collected winter coats for needy people. Presently, each meeting, members bring non-perishable goods for PACH ( People and Churches Helping). On May 22, 1936, the patriotic organizations in town were invited to our May meeting for a memorial ceremony. In September 1938 we invited the teachers, and both of these groups still meet with us once a year. We have also honored several deserving citizens with the Grange Community Citizen Award.

We have held special anniversary meetings on our 50th and our 60th, which occurred on the stormiest night of the year. Charles M. Gardner was the speaker, and after we were able to dig a visiting Deputy's car out, he followed a snow plow out of town so as to get to Ayer to the train. Our 75th was a gala night in this beautifully decorated hall. The l00th was held in the Town Hall, and the centennial history was presented as a pageant.

Several groups have shared the hall with us: the Original Golden Age Group, a pre-school, the Grace Baptist Church, and the Beacon Lodge has been with us for several years.

There have been 66 different Masters. We have given out many Silver Star Certificates, 34 Golden Sheafs, 2 70 yr seals, and also special certificates to 4 non-continuous members.

This is a historical building, and was named after Col. William Prescott, who fought in the Battle of Bunker Hill. During the years there have been thriving times and lean times, but through it all Prescott Grange has survived and hopefully will continue to communicate with the community through our interest in Agricultural endeavors and in the support of National and State Grange projects.