The Town of Pepperell owns a little less than one mile of the rail bed in this location, purchased in June, 2002 for Conservation, with State Self-Help funds from the Massachusetts Division of Conservation Services. Although just a mile, it is a wonderfully picturesque walk along the Nashua River, past ponds, and through lovely woods. You may access using the dirt driveway on River Road directly Town Forest and Picnic Area or from Rt. 119 across from Wilkins farm stand. The trail is also bisected by Yale St, but there is no parking area on this private way. Because there is a paved rail trail on the east side of the river, which provides a long stretch of active recreational space, the Conservation Commission does not intend to change this trail much from its present condition. It will be an access for fishing, short hikes, and nature observation (water birds such as Great Blue Herons and ducks are commonly seen, and turtles bask on logs in the ponded areas).

(Other segments of this line, which once extended from Ayer, MA to Milford, NH, are also publicly owned. The Town of Pepperell owns the rail bed from Main Street north to Tucker Street. From Brookline Street to the New Hampshire border the former line is owned by the Massachusetts Div. of Fisheries and Wildlife. In New Hampshire some portions of the line belong to the Beaver Brook Trust in Hollis.)

The history of the old railroad bed on the west side of the Nashua River in epperell was studied by historian Ronald Karr and told in his books on the old railroads of New England. The following information and quotes appear here courtesy of Dr. Karr and his publisher, Branch Line Press. For further information about the author and his work, visit www.branchlinepress.com

The Fitchburg RR sponsored the construction of this line as part of a route from Ayer, Mass., to Milford, NH. The Brookline & Pepperell and Brookline Railroads opened a line from Squannacook Jct. (near Ayer) to Brookline, NH, in 1892. Two years later the Brookline & Milford RR completed the line to Milford. Beyond Pepperell the prime traffic source was a commercial ice operation that harvested ice from a pond in Brookline. The B&M took over the line in 1900. Passenger service ceased in 1931. The following years the tracks north of Brookline were taken out of service. When a fire destroyed the Brookline ice house in 1935, there were no regular customers left on the line. After a final shipment in 1937, the line was shut down and abandoned two years later."

The rail bed that extends from Route 119 in Pepperell north on the west side of the Nashua River, was built in 1892, leased by the Fitchburg Railroad and absorbed by the Fitchburg in 1895, which called it part of the Brookline and Pepperell Branch. In 1900 the Boston and Maine RR absorbed the Fitchburg. Guilford Transportation Industries took over the B&M lines after 1983. (p. 209. #44.)

"Cynics claimed that Brookline ice was a ruse, and that the line was actually built to enable the Fitchburg to snatch New Hampshire traffic from the Boston & Maine. ....

"The Brookline & Pepperell was always a marginal operation. Between Ayer and Pepperell it closely paralleled the B&M’s Worcester & Nashua Line, which ran along the opposite bank of the Nashua River. In Pepperell, the two lines had stations on each side of the river less than a mile apart. North of Pepperell the line ran through sparsely populated territory that even today [1995] is mostly rural. During the 1920s the B&M ran passenger trains over this route between Ayer and Manchester. Passenger service ceased in September 1931. Ice made up the bulk of freight traffic until 1935, when a fire destroyed the Brookline ice house. A temporary shortage of ice lead to a final cutting at the Brookline pond in March 1937, with the blocks loaded directly onto freight cars. By 1939 manufactured ice had destroyed what market remained for the natural product. ...

"... after the 1935 fire there was no service north of Pepperell, except for the one shipment in 1937. [After 1939 the lines to the north were closed and formally abandoned, which] ... left only the first six miles to Pepperell in operation, with all of the customers located in that town. The B&M proposed building a connection between its Worcester & Nashua line and the shippers on the Brookline & Pepperell across the Nashua River. With this accomplished, the B&M was able to abandon the remainder of the Brookline & Pepperell in 1942. A short segment of track in front of the Pepperell station was used as a wye until the end of all Pepperell rail service in 1982."

"Today [1995] the Brookline & Pepperell is gone, but its route survives as a hiking trail in Hollis and in northern Pepperell (most of the right of way in Pepperell north of Main Street is owned by the town or by the Massachusetts Division of Fisheries & Wildlife)."

If you have any information to add to the description of this or any other recreation parcel in Pepperell, or Conservation website related questions or comments, please contact the Conservation Commission. 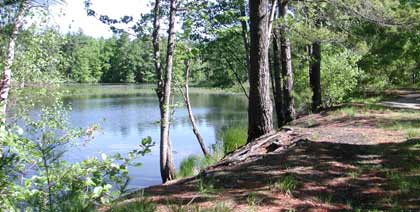