Covered Bridge Over the Nashua River 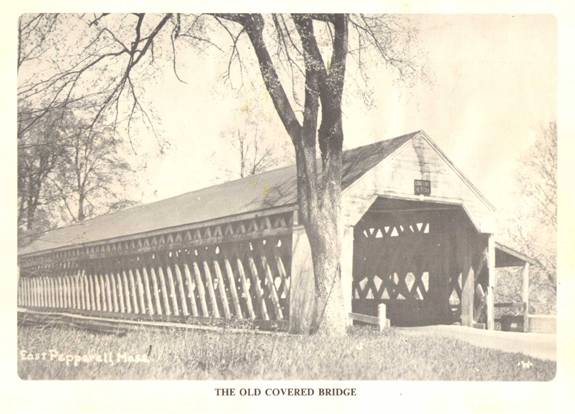 That place on the Nashua River now spanned by the covered bridge has been host to a bridge since about 1740.

Even a brief history of a bridge at that river crossing must include a particular event that took place there just a couple of days after the British regulars marched into Lexington and Concord on April 19, 1775. Pepperell, Groton and Hollis Minutemen responded to that call by the dozens leaving their wives, mothers and sisters to deal with the children, the farms and any situation that might arise.

One Pepperell woman, Prudence Cummings Wright, had been raised in a household that freely discussed politics and not all shared the same opinions.

Prudence was a Patriot, inside and out while her brother Samuel was a Tory, loyal to the King. By 1775 Prudence was 35 years old, had been married 14 years and mother to 6 living children. While visiting her mother in Hollis, she overheard her brother and his Tory cohort, Benjamin Whiting, discuss a plan to deliver a message to British regulars revealing the location of gunpowder hidden by the rebel Patriots. In short time she was back in Pepperell sending an alert out to other women within that network now committed to active rebellion. The women quickly reacted. It was decided to stop the Tory spies at Jewett's Bridge, present location of the covered bridge. They gathered together armaments available, probably not guns because those weapons had gone with the men; but farm tools can be threatening weapons.

Then they waited at the bridge, into the night, shielding the lantern, totally silent until two horsemen approached from the north. Taking advantage of surprise Prudence burst upon them with lantern bright demanding to know their identity and business. Her brother Samuel knew the depth of his sister's commitment to the cause and immediately turned tail avoiding possible fatal injury. Leonard Whiting pushed forward, believing he couldn't be stopped by a bunch of women. He was wrong of course. Both were dragged off their mounts and searched. Dispatches intended for the British were found. The men were escorted to Solomon Roger's tavern. There the prisoners were detained for the rest of night before being taken to Groton and the Committee of Safety in the morning. 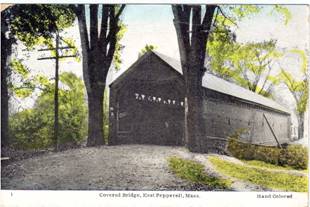 About 70 years later at an 1845 town meeting it was voted to build a new bridge at this location "like the one in Hollis placed over the Nashua River called Runnell's Bridge." This was a covered bridge.

Captain Levi Parker was chosen to build the covered bridge for which he was to be paid $1200 plus he would be given the old bridge. The Bridge Committee believing the existing piers to be sound did not contract for their replacement.

The Town Meeting apparently meant the bridge to be exactly like Runnell's Bridge even though that bridge cost $2,200 to construct, $1,000 more than paid to Parker. The Bridge Committee believing the existing piers to be sound did not contract for their replacement. At a Town Meeting after the bridge was completed the Bridge Committee reported in detail how the Pepperell bridge was inferior to the Hollis bridge, citing items such as floor timber dimensions (6 inch by 12 inch in Hollis laid six feet apart with two braces between each space, Parker used 4 by 12 inch timber laid 3 Â½ feet apart) and Parker's carpentry was inferior. Parker's roof was superior to Runnell's in that he used chestnut shingles on both slopes while Runnell's south slope was pine and just the north side chestnut.

Captain Parker was also required to warranty the bridge for ten years for which he was paid one dollar per year.

In 1858 Capt. Parker's warranty ended. November 2nd of that year the Selectmen informed the town that Capt Lem'l Parker claimed the pier now under said bridge, as his property, but he would let it remain for the sum of fifty dollars being paid him therefore, otherwise he intended to remove it." Capt Parker explained that as he guaranteed the bridge to be safe, he added a pier "for his own benefit as a security for his guarantee." The record indicates that the tenor of the meeting went negative with references to the difficulty that occurred when the bridge was built and the "trickery that developed itself in the whole affair from beginning to end." After several speeches, a motion was made to instruct the Selectmen to build a new pier if they could not settle with Capt. Parker for the old one, passed in the affirmative."

The bridge was maintained and modified over the years retaining its status as the only Massachusetts covered bridge east of the Connecticut River. 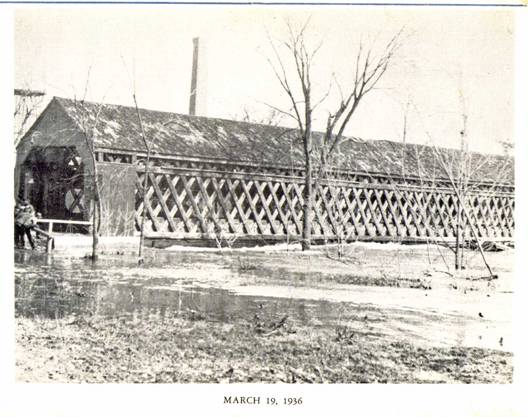 By 1950 one hundred years of wear on the bridge foundation required the weight limit be posted at 4 tons, down from the previous 10 ton limit. Soon the bridge was closed to truck traffic and in 1958 it was closed to traffic. State Representative Chester Waterous, for whom this bridge was named, and many others are credited with the replacement of another, much wider, covered bridge. It was dedicated November 4, 1963. 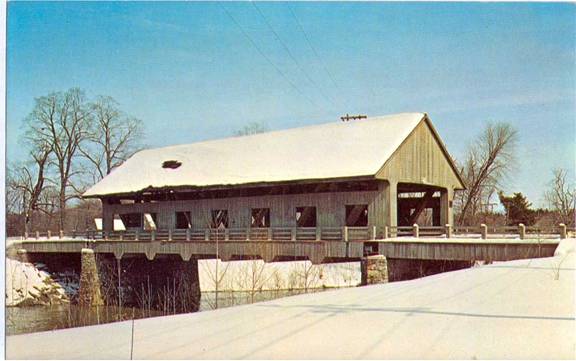 The Chester Waterous Bridge closed to vehicular traffic on April 7th 2008 and demolition began to make way for a new covered bridge. The new replacement bridge re-opened on July 30th 2010. 95 feet in length and 47 feet wide, it contains 1,800 pieces of glued wood laminate, 700 pieces of solid timber and 42,000 pieces of hardware, weighing 475,000 pounds. The historic Pepperell Covered Bridge is one of only three covered bridges on public Massachusetts roads that is open to vehicular traffic and the closest to the greater Boston area. 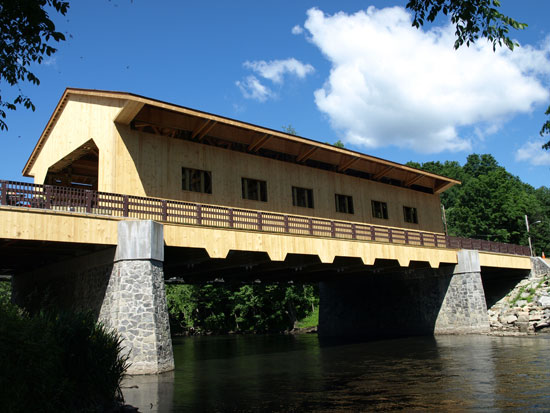